Elvis Presley original Daybill Posters, Elvis One Sheet Posters and Elvis Lobby Cards have been collectible since he burst onto the scene in Love Me Tender in 1956. A year later he changed the course of cinema and music history with the release of Jailhouse Rock.His appearance and dancing style was like no other and the original poster art reflected this.His films mostly had him cast as the young man who could not be tamed but could steal a girls heart. Almost every Elvis Presley film had him singing a song or two that would in some cases be the title of the Daybill Poster, One Sheet Poster or individual Lobby Card. Examples are Viva Las Vegas, King Creole, Follow That Dream,G.I. Blues, Speedway and Charro. Between 1956-1969, Elvis Presley would make 2-3 films per year thus collecting Elvis Presley Daybills, Elvis Presley One Sheets or Elvis Presley Lobby Cards was not difficult back then. Now it presents a challenge as only 31 films were made and the last being 50 years ago as of 2019. Looking for a favourite Elvis Presley Daybill, One Sheet or Lobby Card but can't find it? Then contact us and we will surely find it for you. 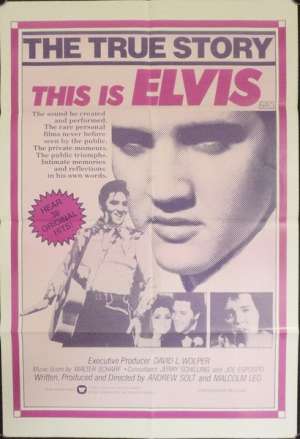