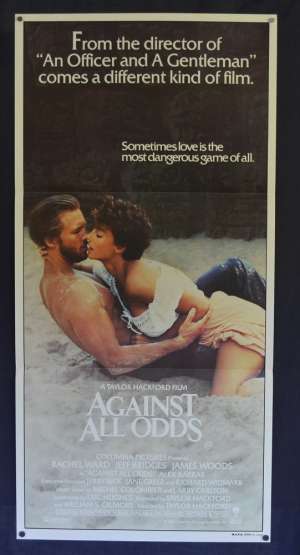 Against All Odds is a 1984 American romantic neo-noir thriller film, a remake of Out of the Past (1947). The film was directed by Taylor Hackford (Known for the film ‘Ray’) and stars Rachel Ward, Jeff Bridges and James Woods alongside Jane Greer (who had starred in Out of the Past), Alex Karras, Richard Widmark and Dorian Harewood. The film revolves around an aging American football star who is hired by a mobster to find his girlfriend. The film's soundtrack, nominated for a Grammy Award, featured songs from Big Country, Kid Creole & the Coconuts, Stevie Nicks and Genesis breakout stars Mike Rutherford, Peter Gabriel and Phil Collins; the latter performed the title song, which was nominated for an Academy Award as Best Original Song and for a Golden Globe Award as Best Original Song, being one of the top-selling singles of 1984.