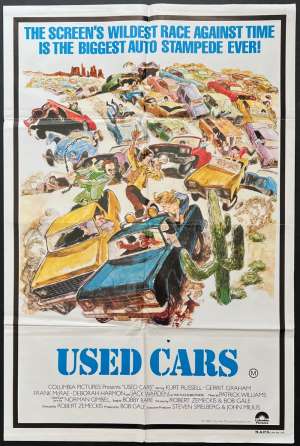 Before they made BACK TO THE FUTURE, executive producer STEVEN SPIELBERG, co-writer/producer BOB GALE and director ROBERT ZEMECKIS teamed up for USED CARS - a super-charged comedy that delivers some of the funniest moments and one-liners ever caught on film.This zany movie takes us into the middle of a war between Luke and Roy Fuchs (both brilliantly played by JACK WARDEN), brothers who own competing car lots and are desperately trying to drive each other out of business. But the battle hits high gear when Rudy Russo (KURT RUSSELL), Luke's ace salesman and a would-be politician, comes up with an outrageous new advertising ploy that is sure to rev up sales and crush the competition.